A recent development is bronze casting. I have had two pieces cast in bronze, at a foundry called ‘Lockbund’. The following is a summary of the casting process. 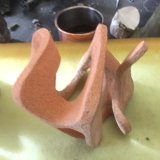 The original was made some time ago in ‘cranked’ clay. 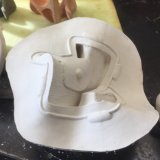 A three-part mould was made. It had a silicone rubber inside with a plaster exterior to give stability. 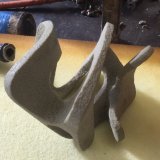 Using the mould, a wax copy of the original was made.
This was then checked for accuracy and signed.

A wax cup or funnel (through which the molten bronze
would eventually be poured) and some wax rods called ‘sprues’ (to act as vents) were then added to the wax copy.

Over the course of several days, a ceramic layer was built up by covering the wax in ‘slurry’ letting it dry, and then repeating this process.

After a significant ceramic shell had been constructed, the whole was heated with a blow torch. This had the effect of setting the ceramic and of melting the wax which drained out. The ceramic shell mould was now ready for molten bronze to be poured in. 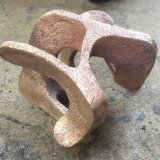 When this had been done, and the result had cooled, the ceramic shell was broken away and the bronze cast was exposed. At this stage, it had bronze rods from the vents and a bronze cup from the funnel. These bi-products of the casting process were cut off (the metal could.be recycled). Any scars were then reworked, to match the original surface. 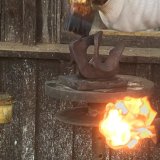 Few sculptures are left in their original bronze state. Patination involves heating the bronze sculpture with a blow torch and then brushing chemicals over it (copper nitrate for green, ferric nitrate for reddish browns). When the patination is complete the finish is sealed with wax,

These sculptures are made from solid bronze.
Larger ones must be hollow, which means that they are made in many pieces that must eventually be welded together. This is a more complicated process.
Next
Previous